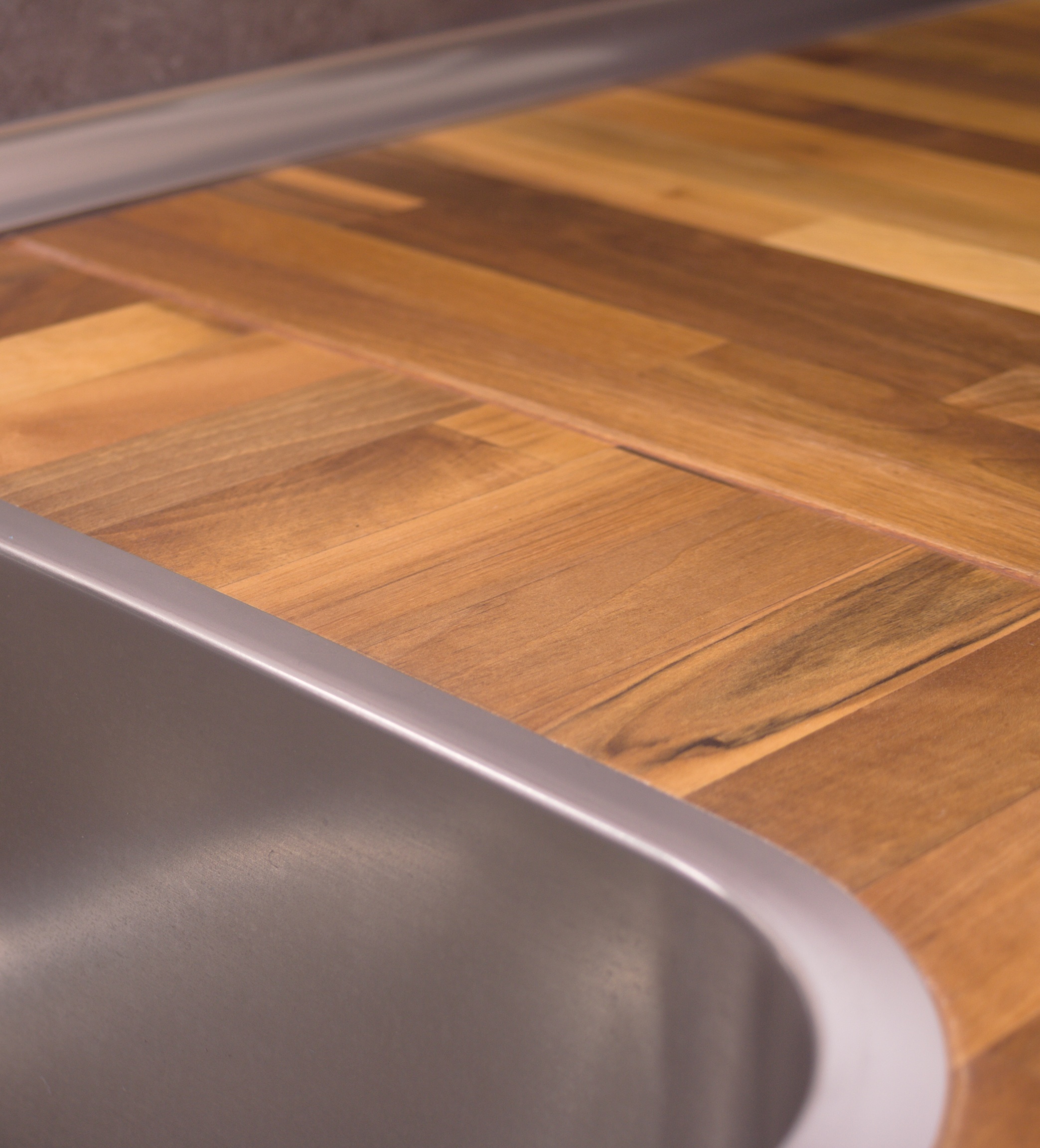 These last couple of months since the summer we’ve been busy with various renovation projects, some bigger than others. From refurbishing some basic interior doors which were in a terrible state, to an entire kitchen.

We’ll explain the latter. This kitchen, which must have dated back to the 80’s at least, and there was nothing to salvage. The flooring wasn’t in bad condition, but the clients were sick of the dated style, so the decision was taken to cover it with vinyl flooring. The wall tiles were kept because they were in reasonable condition except for the odd crack in their glaze, and it was deemed too much hassle to strip them and re-tile.

The clients were clear they wanted a wooden worktop, no matter what innovative alternatives were available, and the budget was tight for the whole renovation. Based on these requirements, a design was created which compared various materials and solutions, bearing in mind that the unforeseen is just that.

So, the first thing was to transform the original hinged door, old and yellowing, into a sliding one, by widening its frame, sanding and repainting it. We also fitted a beautiful beam made from thermically-treated fir above the doorway in the hall, from which we hung the door rail.

The first job in the kitchen was to repaint the ceiling and change the fluorescent tube fitting for a low-consumption LED one. After that we dismantled the upper units and the extractor canopy. Once we had cleaned the surfaces which had been inaccessible for over 30 years, we were finally able to assemble and fit the new units and extractor. All the new units were 10cm higher and wider than the originals, which were made to measure when the building was constructed.

Next, we started dismantling the lower unit, until we got to the point when we wanted to remove the original white marble worktops, which turned out to be built directly into the wall. The process of removing them was largely successful, but where they formed corners there were unavoidable tile breakages. Short of stripping all the tiles there seemed to be little we could do, until we came up with the idea of installing a strip of vinyl anthracite wall tiles along the entire length of the worktop. This worked out well and the strip fitted just below the intact tiles on either side of the window. On the unaffected wall we installed them in front of the unbroken tiles and topped them with an aluminium profile. It was an example of something which came up and led to a better solution than if it hadn’t.

We continued dismantling the units, and we had to be careful because the gas line for the hobs ran through them. Once it was finally clear, we were able to glue down the vinyl flooring and build the lower units, then bolt them all together for stability. When everything was in place and secured to the wall we replaced a couple of old sockets, and were finally able to put the worktop in place. With it positioned, we measured the exact angle it would need to be cut at. At that point we realised that the door to the interior gallery had been mounted in such a way that it would be nearly impossible to remove from its hinges. We chiselled the frame to permit its removal and tidied the space up in preparation for painting it later. Now able to lift the door out easily, we cut the worktop and then routed the angled edge to clean up the cut, then we sanded it and fitted both sections to the lower units. We also routed and sanded the edge of the triangular piece which we cut off to allow the gallery door to open, and we installed it underneath the worktop in the corner as a shelf.

At that point we were free to go about fitting the sink and the gas hob. Another problem cropped up: the manufacturer of the sink hadn’t specified the exact dimensions of the overflow, which meant an awkward drilling operation once the opening was cut in the worktop for the sink. Once all that was in place, the fridge was restored to its original slot and we set about building the drawers and fitting the doors. We treated the worktop with a top quality solid wax oil and it really finished the look of the kitchen off. We just had to fit the oven, which required a dedicated line to the electrical panel at the entrance. The last stage was to install all the profiles around the back edge of the worktop, around the edges of the flooring and the strips beneath the lower units. The kitchen was finished and the clients were delighted. We were also hired to restore and repaint all the door frames in the house, and we suggested a cheery tropical turquoise, inspired by their plant collection.

Here are some photos of the whole process: 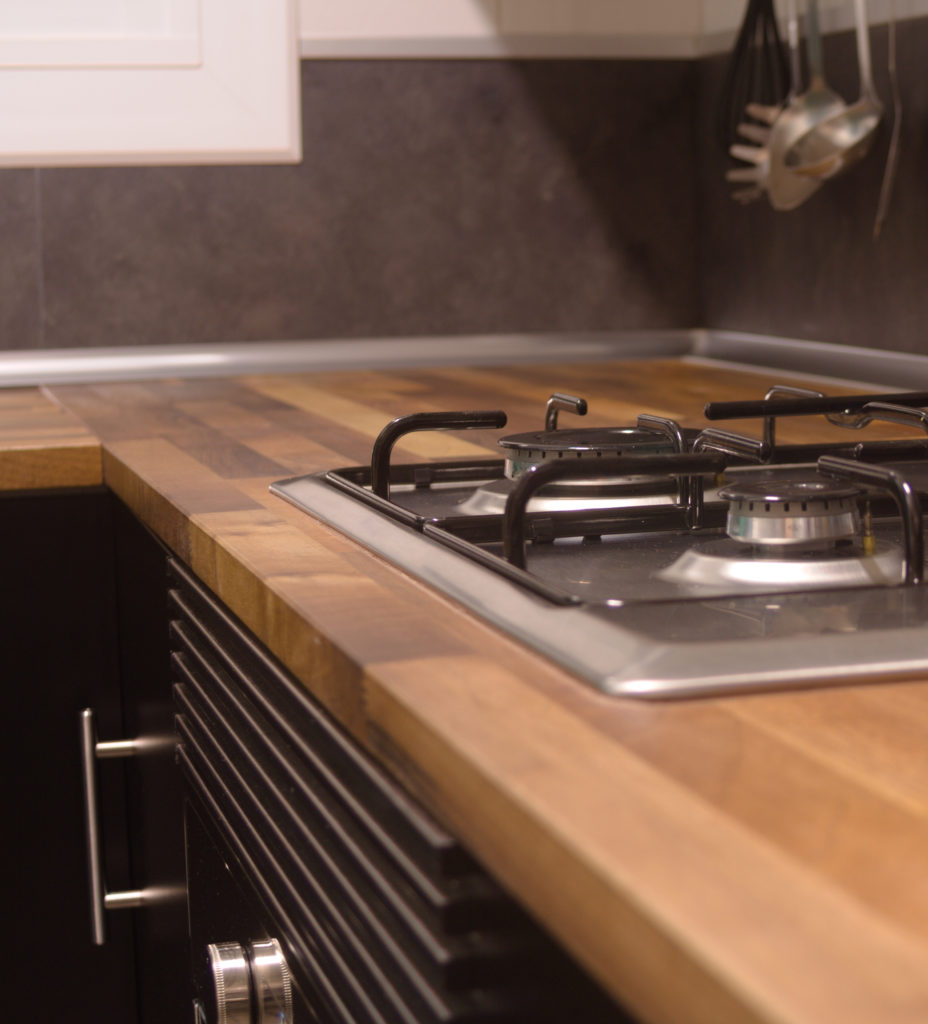 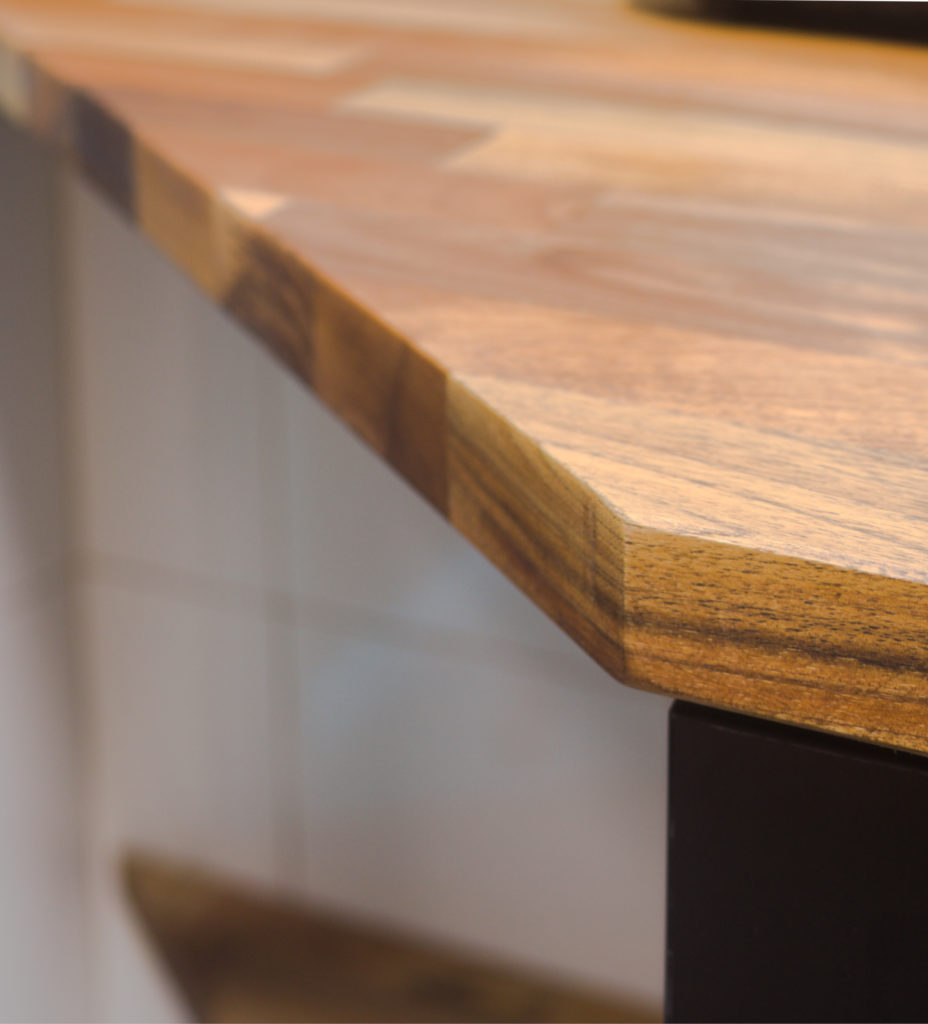 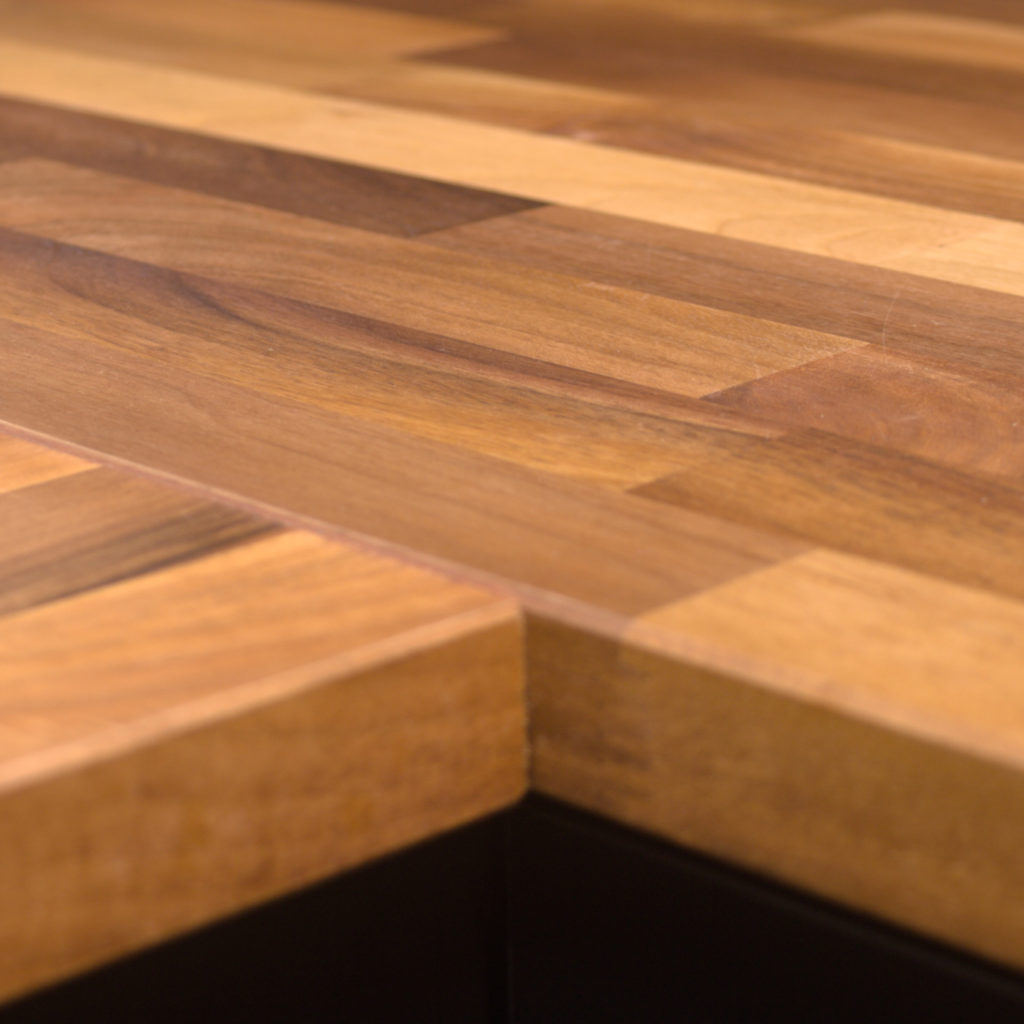 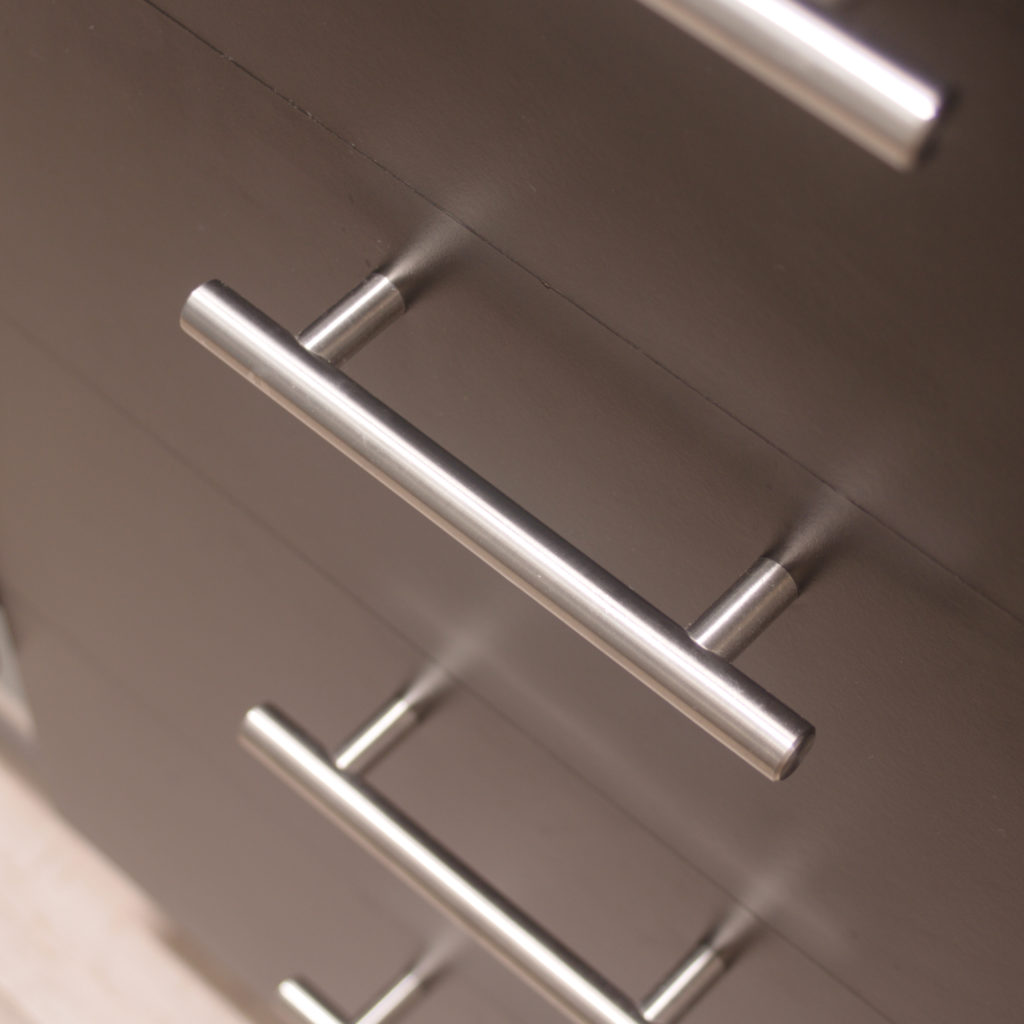 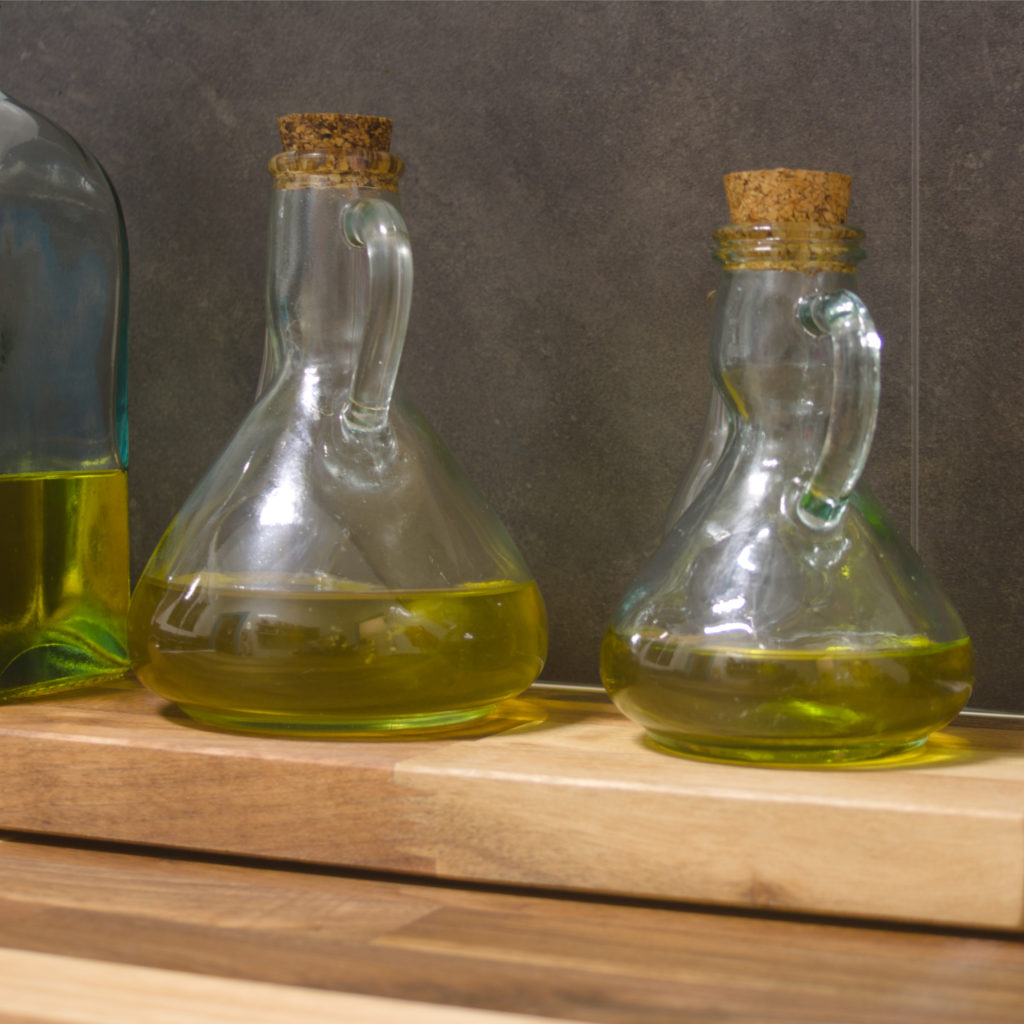 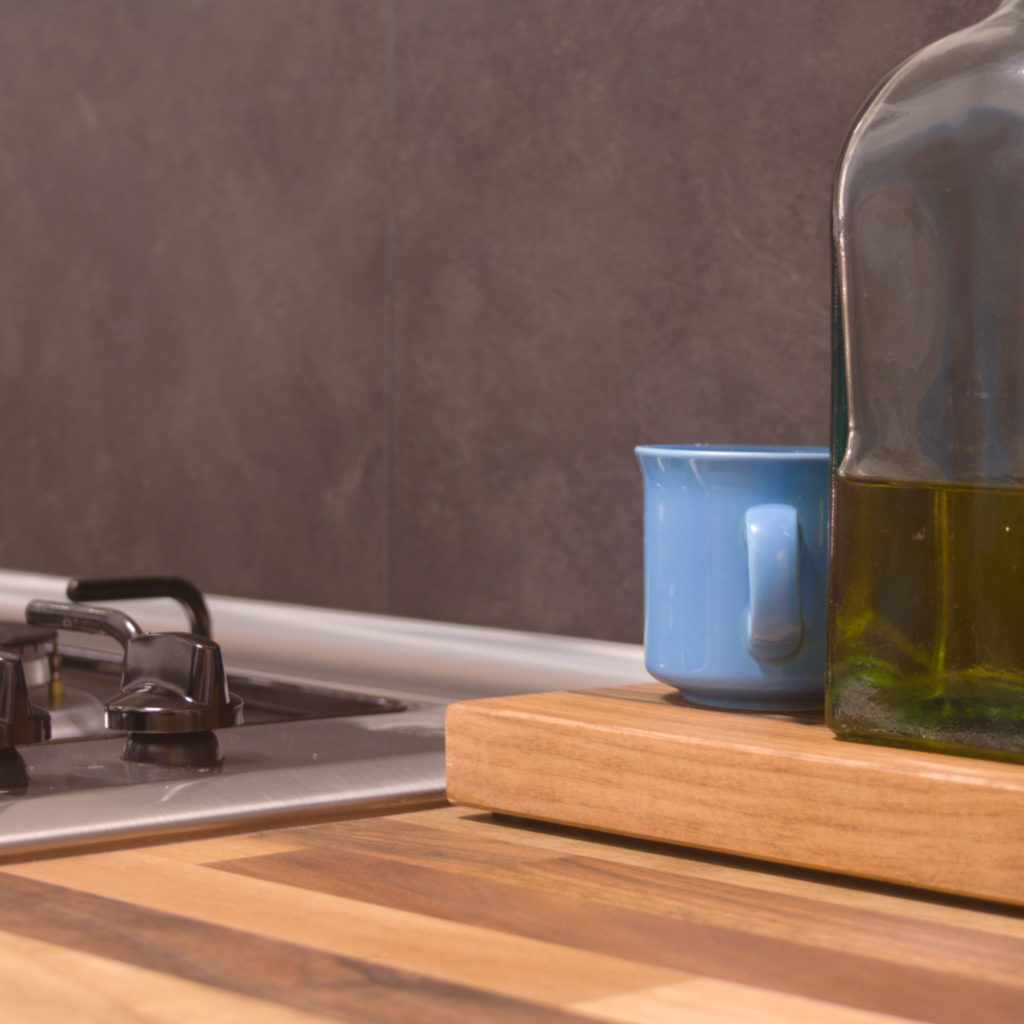 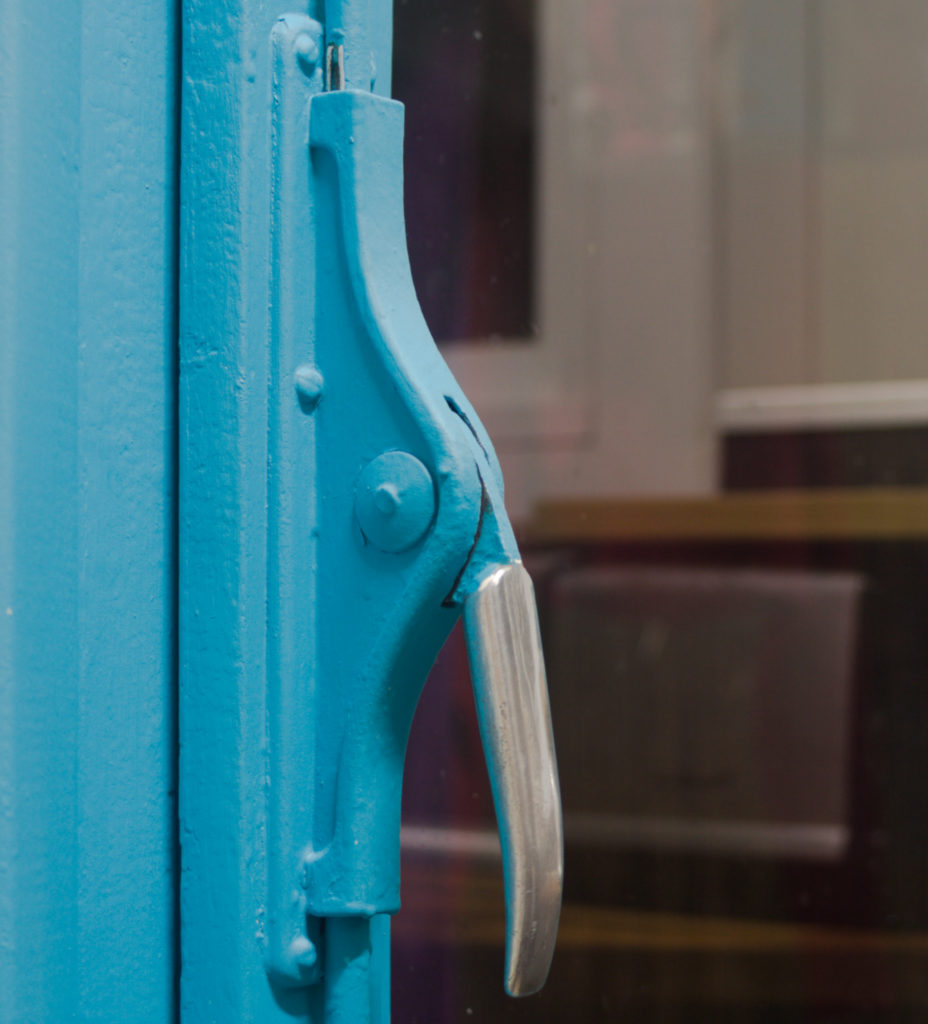 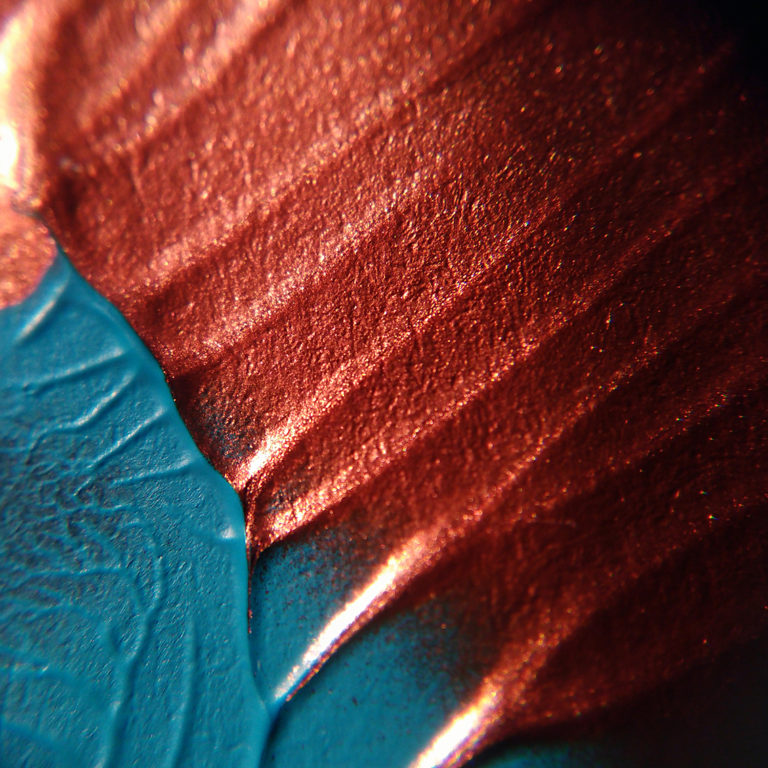 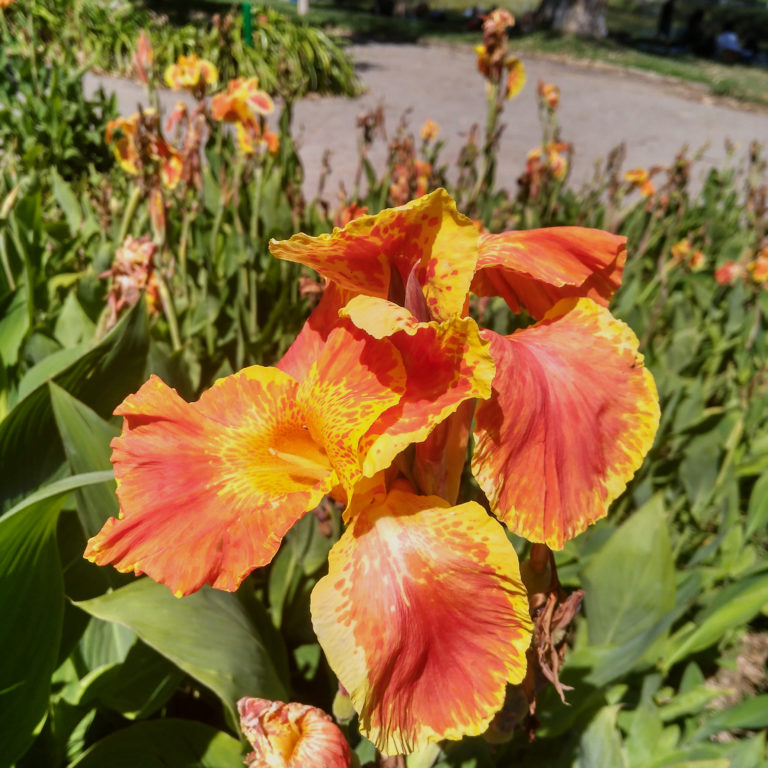 We’re sure almost everybody agrees, at this stage, that plants make your life better. There’s plenty of research done on the topic, with the focus… 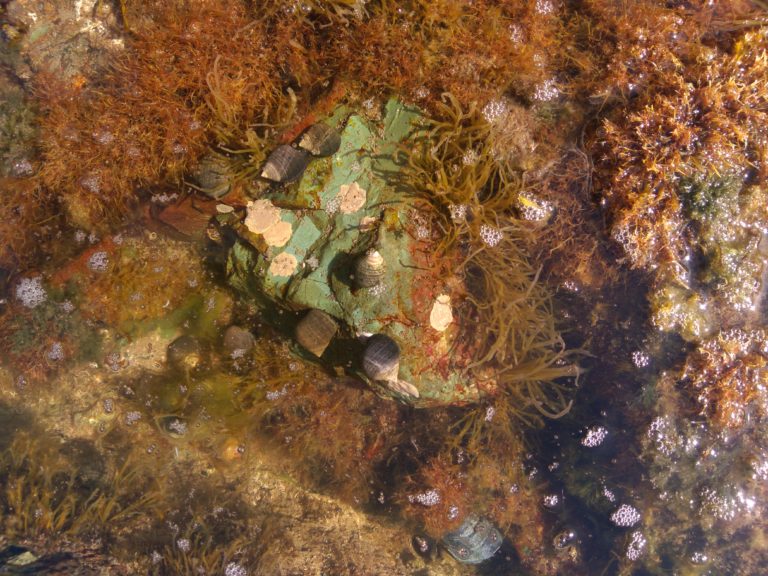 Every artist, design studio or creative company has their history, their trajectory which turns them into what they are. Ana and I come from different… 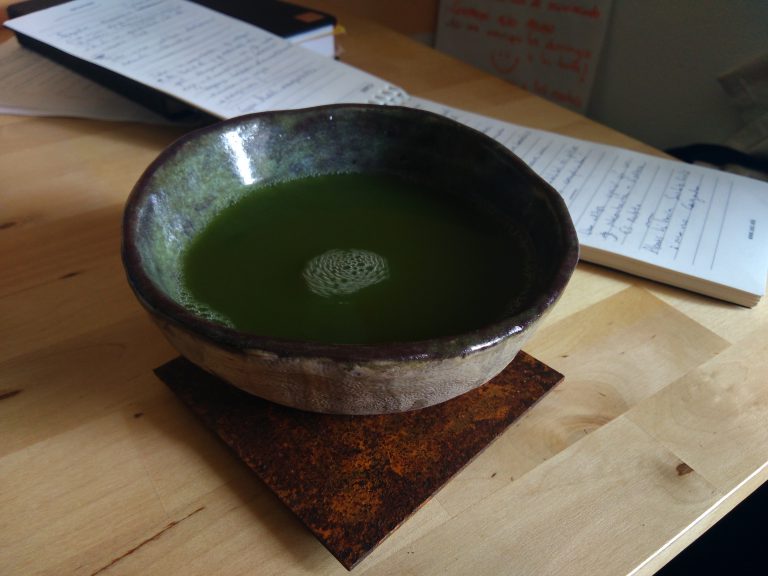 I don’t know about the rest of the world, but here in Barcelona they’re constantly talking about how cool being an entrepreneur is. The truth… 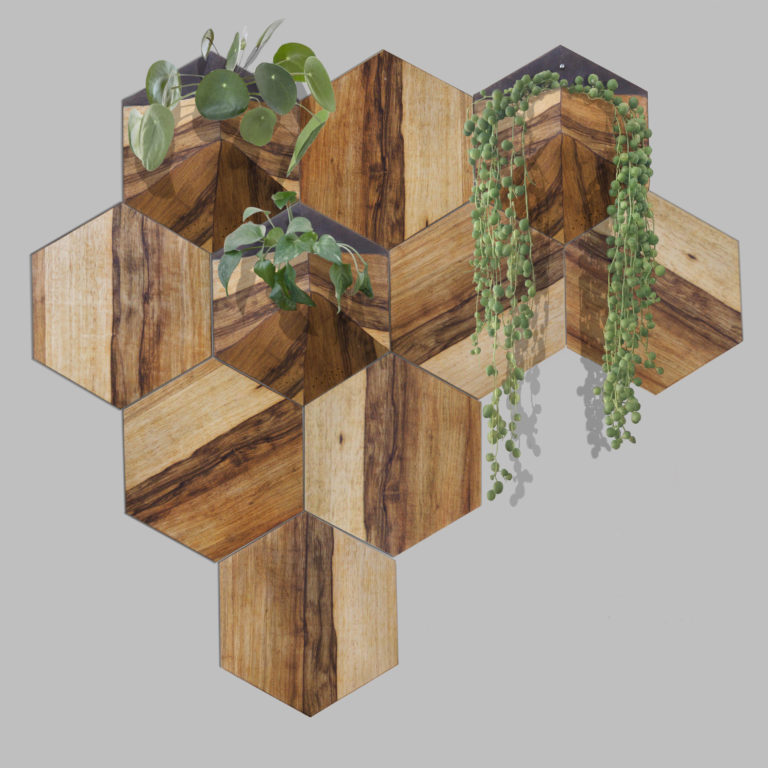 Niwa-Y is one of our most recent projects, and it’s almost completed its prototyping process, so it should be possible to place orders for the… 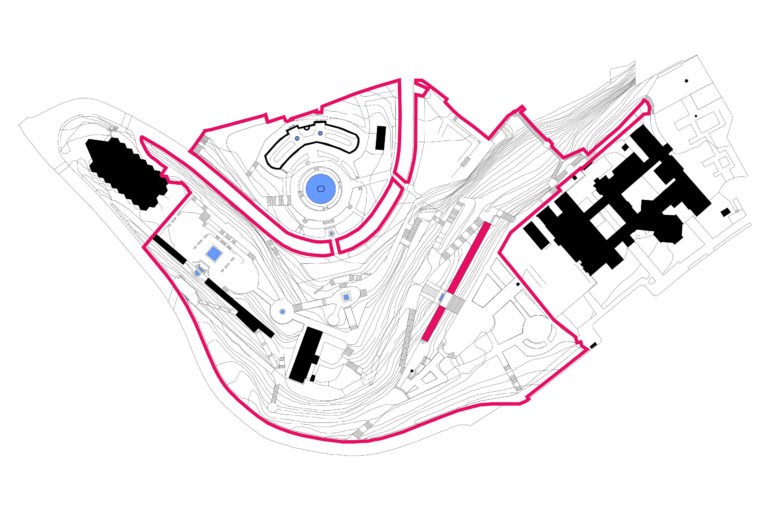 Following on from our last garden article, this one is also about a garden on Montjuïc. Jardins de Laribal is another of the hidden marvels…